Unequal Impact: The Deep Links Between Racism and Climate Change

The killing of George Floyd by Minneapolis police and the disproportionate impact of Covid-19 on African Americans, Latinos, and Native Americans have cast stark new light on the racism that remains deeply embedded in U.S. society. It is as present in matters of the environment as in other aspects of life: Both historical and present-day injustices have left people of color exposed to far greater environmental health hazards than whites.

Elizabeth Yeampierre has been an important voice on these issues for more than two decades. As co-chair of the Climate Justice Alliance, she leads a coalition of more than 70 organizations focused on addressing racial and economic inequities together with climate change. In an interview with Yale Environment 360, Yeampierre draws a direct line from slavery and the rapacious exploitation of natural resources to current issues of environmental justice. “I think about people who got the worst food, the worst health care, the worst treatment, and then when freed, were given lands that were eventually surrounded by things like petrochemical industries,” says Yeampierre.

Yeampierre sees the fights against climate change and racial injustice as deeply intertwined, noting that the transition to a low-carbon future is connected to “workers’ rights, land use, [and] how people are treated,” and she criticizes the mainstream environmental movement, which she says was “built by people who cared about conservation, who cared about wildlife, who cared about trees and open space… but didn’t care about black people.” 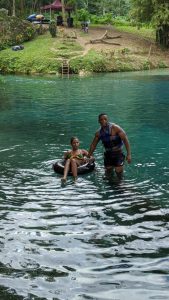 For Jamaica, Climate Change is an Existential Threat