What we know and don’t know on new COVID variant

LONDON — South African scientists identified a new version of the coronavirus that they say is behind a recent spike in COVID-19 infections in Gauteng, the country’s most populous province.

It’s unclear where the new variant first emerged, but scientists in South Africa alerted the World Health Organization in recent days, and it has now been seen in travelers arriving in several countries, from Australia to Israel to the Netherlands.

On Friday, the WHO designated it as a “variant of concern,” naming it “omicron” after a letter in the Greek alphabet.

WHAT DO WE KNOW ABOUT OMICRON?

Health Minister Joe Phaahla said the variant was linked to an “exponential rise” of cases in the last few days.

From just over 200 new confirmed cases per day in recent weeks, South Africa saw the number of new daily cases rocket to more than 3,200 Saturday, most in Gauteng.

Struggling to explain the sudden rise in cases, scientists studied virus samples and discovered the new variant. Now, as many as 90% of the new cases in Gauteng are caused by it, according to Tulio de Oliveira, director of the KwaZulu-Natal Research Innovation and Sequencing Platform. 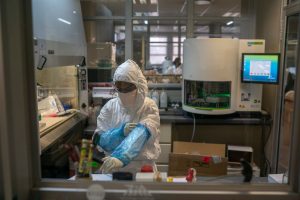