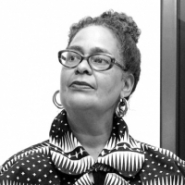 Ziggi Golding, born in London, raised in Jamaica, of Jamaican & German heritage. After a brief stint as a successful model in Europe she founded the Z Agency Ltd in 1983 -1990. An agency based in London representing young talent internationally; models, hair, makeup artists, photographers, stylists in the worlds of fashion, music, photography and film. The agency is credited with being “The Face” of 80’s London. Z models shaped the look and campaigns of designers such as John Galliano, Vivienne Westwood. Jean Paul Gaultier, Yohji Yamamoto, and the visual language of that period. It shaped the look of magazines such as The Face, iD, Blitz, Per Lui, Lei, Italian Vogue, to name a few. Z Agency started the careers of many of the top talent still working in the art, fashion, film, music and photographic and film industry today.

In 1988 (– 2016) she founded Z Photographic & International Marketing, an agency devoted to developing artistic photographic talent within the commercial, publishing and art world, and was an integral voice for photography becoming accepted as a Contemporary art medium in 1989. Many of the photographers whose talent she discovered and developed are names within the photography, film and contemporary art world, such as Renee Cox, Juergen Teller, Nick Knight, Stephane Sednaoui, Koto Bolofo, George Osodi to name a few. In addition, Ziggi Golding produced advertising campaigns, books, catalogues, exhibitions, events, films and videos, and various content for magazines and media.

Believing that the worlds of art, fashion, film and music are parallel businesses, she works across these businesses of culture.

She was co-owner and Creative Director of Gee Street Records (1986-1999), working with artists Doug E Fresh, Gravediggaz, Jungle Brothers, New Kingdom, PM Dawn, Queen Latifa, Richi Rich, Stereo MCs, and the RZA working with artists such as Chaka Demus and Pliers, Jimmy Cliff, Keith Richards and the Wingless Angels, Monty Alexander, Ernest Ranglin. She was responsible for all Artwork, Videos, and Advertising, and creating marketing campaigns and branding for both of the labels.

She executive produced the film “ Bang” by Ash Baron Cohen, which won an Indipendent Spirit award in the mid 90s.

Noticing there were great photographers missing from the art arena in 2002 she brought the Guy Bourdin Estate to the Contemporary art world, with Simon de Pury of the auction house Phillips de Pury, and launched the exhibition “Unseen” by Guy Bourdin, the first comprehensive commercial exhibition since the artists death. During the new millennium she has curated and produced a number of exhibitions, including Festival Jamaica 2012 highlighting Jamaica’s contribution to world culture and economy. She editing and developed a strategy for the photographic art of Charles March, the Duke of Richmond, launching his first exhibition “Nature Translated” in 2013. She edited, produced and curated the Museum exhibition Nigeria Monarchs by photographer George Osodi, which brought awareness to roles the traditional rulers of the various Kingdoms that make up modern Nigeria today. 2013-2016.

For three years 2012-2014 she was the art advisor to the Government of the British Virgin Islands, and in 2013 was invited to host a two day symposium on behalf of the British Council on the exporting and development of creative business in Jamaica.

Since 2000 – she has collaborated closely with curators and museums on exhibitions and in biennales and on global art events across the world. It is her belief that by inviting institutional and academic involvement within a project means that it is recorded for posterity, whilst at the same time developing the commercial aspect enables sustainability and freedom to develop practices further.

In 2020 she began to develop CARIBBA (Caribbean Basin art) Fair to be held as a biennale fair every 2 years in Jamaica from 2022.

She continues to act as an agent to talent close her, and works on creating art, and media projects that inform and affords change in the ways the world views itself.